“Some 12 members of the BBTA attended a Civic Reception on 10th June, hosted by our new Mayor, Cllr. Chery Beath, who was installed as the 787th Mayor of Bath, on Saturday 7th June. One of the Mayor’s first duties was to award Mary Berry O.B.E. the Freedom of the City of Bath, during the Mayor Making ceremony.

This was the Mayor’s first Civic Reception in the Mayor’s Parlour and her first welcome to a foreign dignitary.

This was in honour of Domprediger Joachim Hempel to bid him farewell and a happy retirement after some 20 years service as the preacher at St. Blasius, Dom Braunschweig.    Also present were the rector of Bath Abbey Edward Mason, Charles Curnock and several other members of staff.   Our Chairman presented Joachim with four coasters depicting views of Bath Abbey. The Mayor also made a presentation, and invited Joachim to sign the visitor’s book.   Domprediger Hempel said,  “Face to face contact makes for a safer world.”   How true!

Bryan Chalker, Chairman of the BBTA said later, “What a pleasure it was to meet Domprediger Joachim Hempel again.  He is a man of great warmth and humour and I, too, wish him a fulfilling and happy retirement.  I look forward to the time when our paths cross again.” 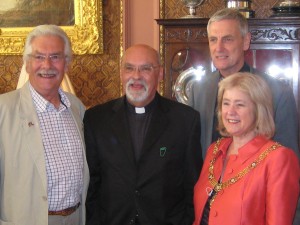 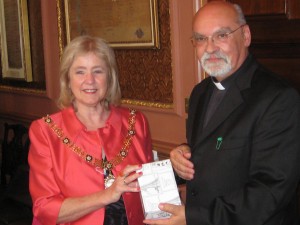