My Dad told me about the mud and conditions in the trenches. They had a small candle alight at night when on duty, but off duty he and his brothers tried to get a little sleep under their warm coats . With mutual agreement the candle was blown out. Then they felt the rats crawling over them whilst huddled under their coats, pulling their collars up tight and kicking out blindly. In the morning Dad’s coat pocket had been chewed to bits because he had left a stale biscuit in his pocket.

Foot rot was called “Trench foot” which was due to standing in mud and water for weeks. Many soldiers lost their complete toes. The medic stuck his tweezers under them, peeling all the toes off in one lift. They were plagued with lice in every seam of their uniforms. Dad  and his brothers were only allowed one leave back home.

The army baked their uniforms to kill the lice infestations, arriving home they was greeted by their  mother who said, “When are you going back boys ?”  Showing them into the front room during which she left to make a nice cup of tea. Dad said that they sat quietly, looking around the room, listening to the steady tick of the wall clock – Tick Toc. Nothing had changed, even the old Aspidistra plant was still alive which made them realise that neither his mother or father, had any idea about the horror they had just left.

Dad spoke mostly of the conditions they suffered in the trenches nothing about the awful scenes he observed. He and his two brothers were among the first to go over the top, running the gauntlet of ‘No Mans Land’ with machine gun bullets flying all around them on the first day of the battle of the Somme. Finally separated from their regiment, shell shocked they ran with the still living into the arms of a British officer who said, “Where have you come from soldiers?” Dad replied, “From the Somme sir, from the Somme !”  The officer replied, ” Poor boys, poor boys!” On the first day alone, the British army suffered more than 57,000 casualties, My Dad and his two brothers survived the war! 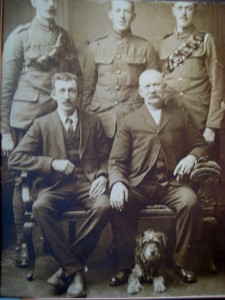